In India, right after the announcement of the Vivo Y20G an entry-level smartphone, the company unveiled Vivo Y31 as well. Going by the handset it debuts with the Qualcomm powered chipset the Snapdragon 662 at the helm. The key highlight of the handset is a 48MP triple camera system much like the Vivo X50 series, 5000mAh battery with 18W charging speed and the FHD+ display. 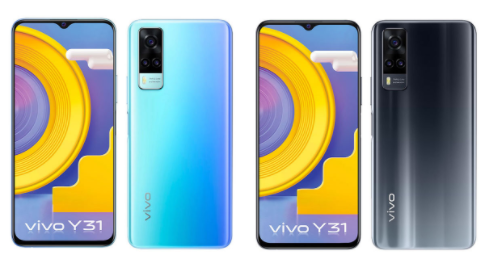 The Vivo Y20G  and the Y31 both are shipped with a single storage option, configured at 6GB+128GB. Besides, the Y31 handsets also available two colour options to choose from Racing Black and Ocean Blue. As far as the price of the handset is concerned, it available for ₹16,490. The handset available through the all major e-retails in India like Amazon, Flipkart and in the Vivo outlets as well.

Under the hod, the system on the handset has been powered by a Snapdragon 662 SoC. It coupled with 4X Kro 260 Gold at 2.0GHz clock speed & 4X Kyro 260 Silver at 1.8GHz clock speed which processed in an 11nm architecture. Further, it bundled with Adreno 610 GPU and 6GB RAM alongside the 128GB inbuilt storage. The system on the handset runs on Funtouch OS 11 based on Android 11. And it is being fueled by a 5000mAh battery with 18W fast charging speed.

For the connectivity, it has 4G and dual-band Wi-Fi. Whereas, there rest options including a USB Type-C port, 3.5mm audio jack, Bluetooth 5.0, and other required sensors.