Back in April last year, the HMD Global Nokia has released the Nokia 1.3, now a leaked has emerged of being the purported successor. The successor Nokia 1.4 has emerged with a full spec sheet while it could be priced under ₹8,800 in India. Going by the handset it is an entry-level smartphone powered by an unspecified 1.3GHz quad-core processor. The handset does not suit the requirements of 2021 as it as 1GB+16GB memory configuration and a quad-core chipset instead of an octa-core, in my opinion. 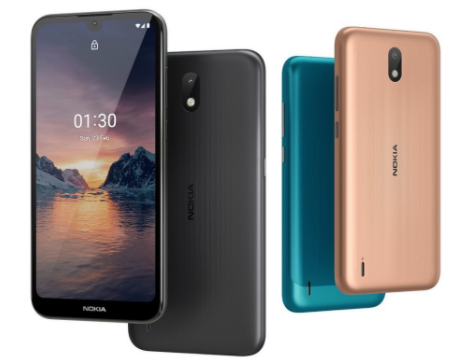 If the HMD Global Nokia really planned for this handset, it definitely gonna disappoint the company. In the Indian market, the consumer will prefer the Micromax a made in India handset over the purported Nokia 1.4.  Anyway, let’s look into its specifications below.

At the upfront, the handset is built around an HD+ resolution LCD IPS display of size 6.51″ inch diagonal with a waterdrop notch at the top. Underneath the notch, it is a 5MP selfie camera sensor built into it. While around the back, it has a dual-camera setup consisting of an 8MP main camera sensor. An auxiliary 2MP depth camera sensor and an LED flashlight built into it. The fingerprint scanner can be seen at the rear below the camera module as well.

Under the hood, the system on the handset is being powered by an unspecified 1.3GHz quad-core processor. Further, the SoC coupled with 1GB RAM and 16GB inbuilt storage, while the memory expansion is supported through the microSD card slot. The system runs on Android 10 OS (Go-edition) while it is being fueled by a 4000mAh battery with normal charging speed.

As far as the connectivity options are concerned, it has 4G & Wi-Fi connectivity. Whereas, the rest option includes a micro USB port 2.0, 3.5mm audio jack, Bluetooth 4.2. The sensors included in the phone are an Ambient light sensor, proximity sensor & accelerator sensor. For the security, the fingerprint sensor is available as well. The handset could be available in two different colour options to choose from Blue and Grey.