This week, the upcoming Realme X7 series was tipped to launch on February 4. Now it been finally confirmed by the company, and the tip is turned to be true. On 4th February Realme is launching its X7 series in India, includes Realme X7 and X7 Pro. The X7 handset is powered by the MediaTek Dimensity 800U. Whereas, the Realme X7 Pro is powered by the Dimensity 1000+ chipset. As soon as the launch date and handset are confirmed, the social media is ranted up with rumours regarding the Realme V15 of being X7 in India. But both of these handsets are different though it appears to be the same from outside. 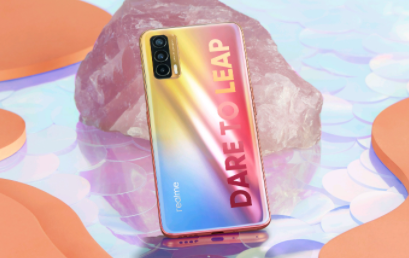 The difference between Realme X7 and Realme V15

At the upfront, the handset is built around an FHD+ resolution Super AMOLED display of size 6.4″ inch in diagonal. While the screen has a punch hole at the top left corner, underneath it has a 32MP selfie camera sensor. While at the rear, the handset has a rectangular-shaped camera module consisting of triple-camera sensors and an LED flashlight built into it. The sensors are of a 64MP main sensor, an 8MP ultrawide sensor and a 2MP macro sensor.

Under the hood, the handset is powered by a MediaTek Dimensity 800U chipset. Further, it bundled with up to 8GB RAM and 128GB internal storage. The system on the handset has been fueled by a 4300mAh battery with 65W rated charging speed.