A few months back, POCO becomes an independent brand after it got separated from Xiaomi. The same way Honor got separated from Huawei on 22nd January. As soon as Honor becomes an independent identity, it has announced Huawei-less first flagship. The handset debut Honor V40 5G in China features premium looking and expected to have the support of Google play service. Going by the handset – It is3 the first flagship handset from the company. While maintaining the company’s trend of being affordable than the most other flagships. 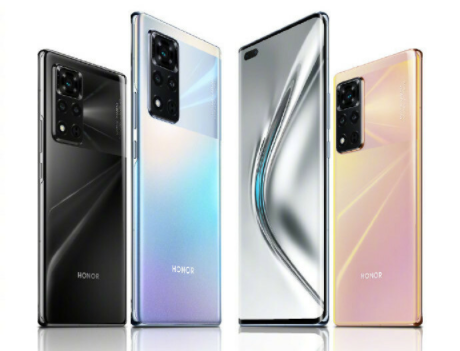 The handset went on sale on the same day of announcement across mainland China. There is no information available regarding the availability of the handset outside China. Meanwhile, the company brought the handset in two storage variants configured as 8GB/128GB and 8GB/256GB. The 128GB variant retails for Yuan 3599 (around ₹40,500) whereas the 256GB variant will be available for Yuan 3999 (around ₹45,000)

At the upfront, the handset is built around an FHD+ resolution waterfall curved OLED display of size 6.72 inch. Further, the screen has support for HDR10, 120Hz refresh rate, 300Hz touch sampling rate and 800 nits of peak brightness. Furthermore, the screen has dual punch holes for the selfie camera unit. Which consisting of a 16MP sensor and a colour spectrum sensor. The biometric scanner is placed beneath the display of its bottom half. While around the back, it sports a rectangular-shaped camera module consisting of triple camera sensors and an LED flashlight built into it. The camera sensors are of a 50MP main sensor, an 8MP ultrawide sensor, and a 2MP macro sensor.

Under the hood, the system on the handset has been powered by the MediaTek Dimensity 1000+ SoC. Further, it bundled with Mali-G77 MC9 GPU and 8GB of LPDD5 RAM alongside the UFS 2.1 secondary storage support. The system runs on MagicUI 4.0 based on Android 10 while it is being fueled by a 4000mAh battery with 65W speed wire charging, 55W speed wireless charging and 5W reverse charging.

For the connectivity, the handset is 5G and Wi-Fi 6 equipped. The rest of the connectivity option includes USB Type-C port, NFC, Bluetooth 5.1 and other required sensors including fingerprint scanner (under display).