Back in September, last year Realme has unleashed Realme 7i in India and several Asian countries. Now, the European branch of the company announced the Realme 7i with a wist. The handset we have been discussing is rebranded as the Realme Narzo 20. The European 7i is way more powerful than the Indian and the Asian edition of the Realme 7i. It has nothing to discuss the handset extensively except for the price and availability in Europe. However, it worth mentioning including this European 7i, Realme 7 series total brings to four in count in Europe. The handset includes Realme 7, Realme 7 5G, Realme 7 Pro and the Realme 7i. 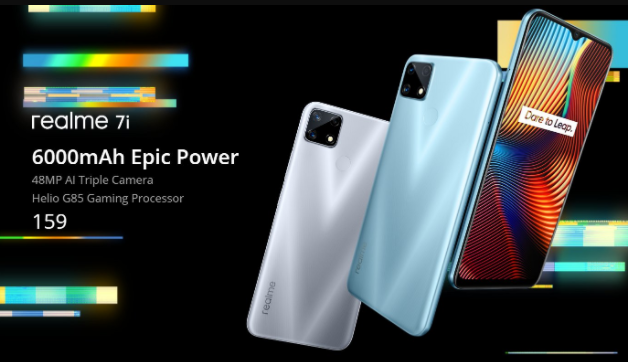 The handset arrived in Europe in a single storage variant, configured 4GB/64GB. While the handset has been offered in two colour options to choose from Glory Silver and Victory Blue. The handset retails from EUR 159 (around ₹14,100) and available for purchase through the Realme official website and its outlets.

The handset has built around in 164.5 x 75.9 x 9.8 mm dimensions while it weighs around 208g in a plastic body design. At the upfront, the handset has an HD+ resolution LCD IPS display of size 6.5″ inch in diagonal with a dewdrop notch at the top. Underneath the notch, here is a room for a selfie camera of an 8MP sensor. While around the back, the handset sports a rectangular shaped camera module consisting of triple camera sensors and an LED flashlight built into it. The camera sensors are of a 48MP main camera, an 8MP ultrawide camera and a 2MP macro camera. The fingerprint scanner placed below the camera module and Realme logo at the bottom of the handset.

Under the hood, the system of the handset has been powered by an octa-core MediaTek Helio G85 chipset. Further, it has been configured as 2X Cortex-AA75 at 2.0GHz and 6X Cortex-A55 at 1.8GHz clock speed. Further, it coupled with Mali-G52 MC2 GPU and 4GB of RAM besides the 64GB onboard storage. However, the storage can be expanded through a dedicated microSD card. The system runs on RealmeUI based on Android 10 while it is being fueled by a 6000mAh battery. The handset supports 18W fast charging for fast refuelling.