It took four months to escape from China for Realme. Back in September last year, Realme has announced the Realme X7 series in China. It includes two handsets, the vanilla Realme X7 and the X7 Pro. Now, the series has been unveiled in India, but fans are upset over the pricing of both handsets. In comparison with the original pricing, the Realme X2 pro is still unbeatable by the company. Before jumping into the pricing warp-up, let’s have a birds-eye view of these handsets. 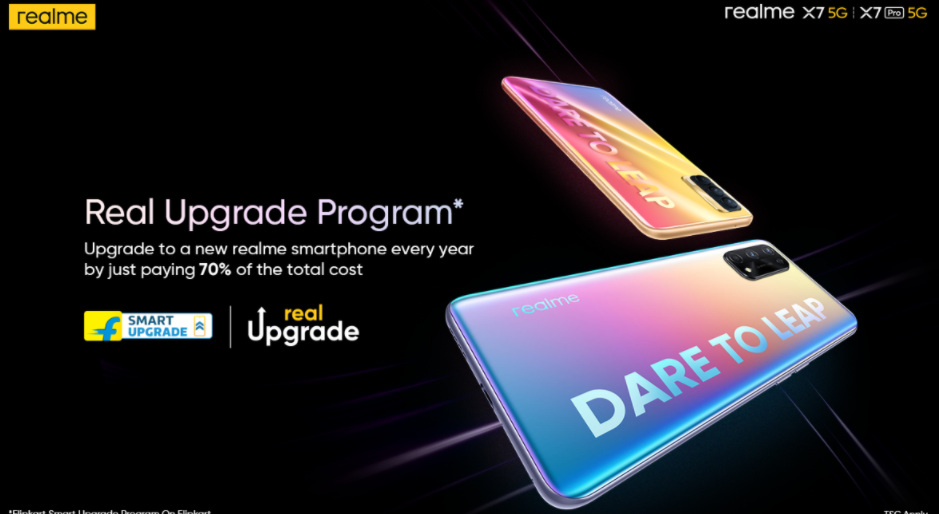 The vanilla X7 will be shipped with two storage configured variants, 6GB/128GB & 8GB/128GB. Besides, the handset will have been offered in two colour options such as Nebula and Space Siver. Whereas, the Realme X7 Pro will be shipped with a single storage option configured as 8GB/128GB. Besides, this handset will have been available in two colour options such as Fantasy and Mystic Back. After unveiled the price of the handset, Realme fans gone crazy as they found the old Realme X2 Pro more value for money than this brand new series.

As soon as the company realised the handset were overpriced, the company has introduced a special offer called Real Upgrade Program. The program eventually makes the handset more affordable as the price starts from ₹13,399 and went up to 20,999 for the top model.

Long story short, the Real Upgrade Progam falls under Flipkart Smart Upgrade Program. All you have to do to pay a total of 70% cost of the handset, rest 30% you can pay after the 12months period.