Back in August last year, Vivo has announced the S7 5G powered by the Snapdragon 765G. Now, the same handset has been relaunched in China this time with MediaTek Dimensity 820 chipset. The handset debut Vivo S7t, except for the chipset remains identical to the Vivo s7 5G. However, from the software side, Vivo S7 5G runs on Funtouch 10.5 OS based on Android 10 out of the box. Whereas, the MediaTek powered Vivo S7t runs on OriginOS 1.0 based on Android 11 out of the box. 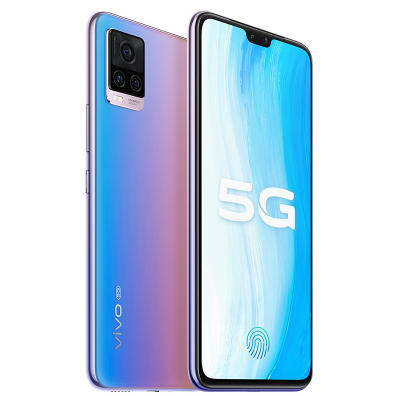 Currently, the handset available in a single storage variant option configured at 8GB/128GB. While the Vivo S7 5G available in two storage configured options 8GB/128GB and 8GB/256GB. Like the S7, the S7t 5G also comes in two colour options to choose from Black and Gradient Blue. The handset is available for pre-order in China while it retails for CNY 2,598 (around ₹ 29,300) across Vivo stores and major online retails.

The handset built on 158.8 x 74.2 x 7.4 mm dimension and 169g in weight. While at the upfront, the handset has an FHD+ resolution AMOLED display of size 6.44″ inch in diagonal. The screen has a notch at the top holding a set of dual selfie cameras of a 44MP main sensor and an 8MP auxiliary ultrawide sensor. Meanwhile, the biometric scanner is placed at the bottom half of the screen as an optical fingerprint scanner.

Around the back, the handset has the same treatment as the Vivo S7 5G. It has a rectangular-shaped camera module consisting of three camera sensors and an LED flashlight built into it. The camera sensors are of a 64MP main sensor, an 8MP ultrawide sensor and a 2MP depth camera sensor.

Under the hood, the system of the handset has been powered by a MediaTek Dimensity 820 octa-core chipset. While it has been bundled with Mali-G57 MC5 GPU and 8GB of RAM alongside the UFS 2.1 storage support. It runs on OriginOS 1.0 based on Android 11 out of the box. While it is being fueled by a 4000mAh battery with 33W fast charging capability.

The connectivity option includes 5G, Wi-Fi (dual-band), NFC, a USB Type-C and all the required sensors. While the 3.5mm audio jack no longer exists in the Vivo S7 series.